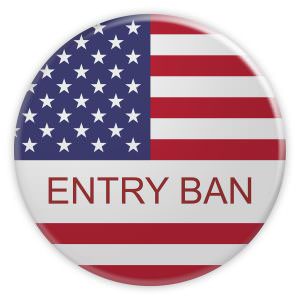 On Wednesday, March 15, federal judge Benjamin Watson of Hawai’i issued an order blocking President Trump’s revised travel ban.  The ban was set to take effect the following day.  The revised travel ban, much like the President’s first attempt, would primarily have affected travelers from the predominantly Muslim countries of Iran, Somalia, Libya, Syria, and Yemen.  Judge Watson defended his decision by citing Trump’s comments concerning Islam and Muslim people during his campaign, arguing that Trump’s travel ban was issued to “disfavor a particular religion.”

Thursday morning, Judge Theodore Chuang of Maryland took similar action and ruled that the travel ban was likely an attempt at enacting Trump’s campaign proposal of banning all Muslims from entering the United States.  While Judge Chaung’s order, unlike Judge Watson’s, did not block the travel ban outright, it does deny the enforcement of key provisions.

President Trump reacted Wednesday at a rally in Nashville, calling Judge Watson’s ruling politically motivated.  Trump continued by saying the ruling made the United States “look weak” and suggested he might even reissue his initial executive order concerning the travel ban, claiming that the provisions of the most recent travel ban were “watered-down” versions of the original.

In Washington state, a third federal court is preparing to hear a case challenging the constitutionality of the ban, while across the country groups are organizing to file suit against the ban as well.  While Judge Watson and Judge Chuang’s rulings are in no way final decisions on the ban, they do reflect a trend in which federal courts have questioned the constitutionality of both the prior and revised versions of the ban.