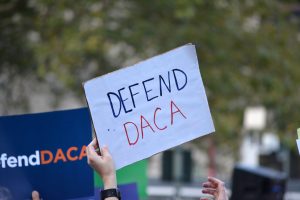 Much uncertainty has surrounded the Deferred Action for Childhood Arrivals, or DACA, since Trump’s presidential candidacy began. His campaign promises included many controversial changes to immigration policies, particularly the removal of the DACA program altogether. Since his presidency, the administration has moved forward with its plans for DACA, while meeting much resistance both inside and outside of Washington, D.C.

Deferred action is a discretionary determination, using prosecutorial discretion, to defer the removal of individuals who may otherwise be removed due to their immigration status. DACA specifically applies to those of immigrant status who arrived during childhood, usually with an immigrating family member. The program has been at the center of heated debate on Capitol Hill.

On January 13, in an effort to eliminate much confusion about those who have previously applied for or been granted deferred action under DACA, the USCIS released a statement regarding the program. “Due to a federal court order, USCIS has resumed accepting requests to renew a grant of deferred action under DACA. Until further notice, and unless otherwise provided in this guidance, the DACA policy will be operated on the terms in place before it was rescinded on September 5, 2017.”

In June of last year, the attorneys general of several states sent a letter to U.S. Attorney General Jeff Sessions, claiming that the DACA program was unlawful. The states claimed that the reasoning stated in the Fifth Circuit and district courts regarding an expansion of DACA and the (now rescinded) DAPA program mean that the current DACA program is unlawful as well. The letter provided a deadline for the Department of Homeland Security to take action by September 5 or face a lawsuit.  As a result, Attorney General Jeff Sessions issued guidance to rescind the June 2012 memo that created DACA.

What This Means For DACA Applicants

DACA requests will now be adjudicated under the guidelines presented in the June 15, 2012 DACA memo under the Obama Administration. USCIS is not accepting requests from those who have never been granted deferred action under DACA, and it is not accepting requests for advance parole from DACA recipients. However, individuals who have previously been granted deferred action may request renewal at the USCIS designated location for filing, by filing Form Form I-821D, Form I-765, and Form I-765 Worksheet, with the required fee or an approved fee exemption request.

If you have previously received DACA but it expired after Sept. 5, 2016, you may still file a renewal request. On Part I of Form I-821D, list the date your prior DACA ended.

Because renewal requests are usually required within one year of the expiration of your last period of deferred action, if your DACA expired before Sept, 5, 2016 (or was previously terminated at any point), you cannot request DACA as a renewal. You may file a new DACA request with form I-821D and Form I-765. In this instance, on Part 1 of Form I-821D, please list the date your prior DACA expired or was terminated.

It is worth noting that DACA does not grant a legal status to applicants, but rather, is a discretionary determination for deferred action. This may be terminated at any time, with or without notice, at the discretion of the Department of Homeland Security.

Additional information is expected to be released from USCIS.